Congratulations to Daniel Worthington who sent in the correct solution to the Golden Oyster treasure hunt on 15th May 2022. The treasure hunt has lasted almost exactly two years as the first books were printed in May 2020. Daniel wins the Golden Oyster brooch plus the prize cash of £1,138. Thanks to everyone who played this game and bought a clue book to help build this prize fund.

The oyster was hidden in the Westmeads recreation ground, a popular park in Whitstable. Daniel is a 23 year old medical student, studying in Plymouth but originally from Yorkshire. His solution, which was emailed to me in line with the rules, is copied below, so you can see the workings out that helped him find the treasure.

I believe the oyster is hidden in Westmeads recreation ground, specifically near/in the playground. Please find my method outlined below.

2. Determine the colour of the page by taking the colour exactly halfway between the eye of the needle and the spider on the page.

4. Draw a line between the locations based on the halfway colour. This forms a grid/net with exactly 10 lines and 16 boxes.

5. Use the groups of paint splodges on page 1 to create 4 boxes (each paint splodge corresponds to a relevant border of a box, see pic below.)

6. Each one of these boxes contains a church, the corner image for the key page along with the additional clue are both churches.

7. If we connect these churches we create a cross that lands on Westmeads recreation ground, next to Wheatley road.

There were several subtle hints to this ‘grid’ solution method. The Golden Oyster’s logo depicts an oyster and a net, which is similar to the grid of lines that form on the map. The successful solver was drawing a net to catch the oyster! ‘Drift maker’ is an archaic phrase to describe a net maker, and there is a picture of a net on the first clue image, plus ropes and threads in the additional clue. The final location involves nets as there are basketball nets and goals at the park. Obviously real Whitstable oysters are not fished with nets, but this is a different kind of fishing!

The use of coloured threads to make this special net is signalled by the use of a rainbow, paints, easels, the colours of the paintings, and the idea that the spiders are spinning with coloured thread in the additional clue. The idea of measuring halfway between the needle and the spider is signalled by the ruler on page one, the halfway theme of the additional clue and some anagram phrases. The needle and spider when linked up always show a section of colour on a pictured artwork at the half way point.

The use of the churches in the final stage is signalled by the picture of St Alphege’s Church on the first clue page, which works as the ‘set up’ page for the hunt. As Daniel noticed there was also a church on the additional clue, this one is St Johns Methodist Church on Argyle Road.

The anagrams created from the border text of the clues can also be decoded to spell an instruction, ‘Find crosses to make one.’ The way to decode this involves working out the significance of the different colours and symbols used in the border images. The additional clue hints that the text colours matter.

Some clue borders depict black squares, some show keyhole shapes and some show diamonds. The diamond shape I used in some borders came from the clue one image of a red herring in a picture frame. Borders with this diamond led to red herring anagrams.

The border puzzle rules were as follows.

Coloured letters and red herring diamonds mean the anagram phrases are no real help at all. Eg. vice versa, backwards, left not right/right not left?

Black squares and brown or grey letters mean these are useful phrases but not key to the solution. These either decode to subtle hint phrases about the solution method, or brown phrases link to sport in some way. This is a confirmation of the treasure’s final location in a recreation ground where sports are played.

The coloured anagram letters and pages with keyhole icons are ‘key’ to the solution using the churches. The five key phrases are as follows:

TO THE OYSTER Keyhole icon with green letters.

The key anagram phrases need to be sorted in rainbow colour order. Richard of York gave battle in vain is my usual way of remembering the order as red, orange, yellow, green, blue, indigo, violet! If the phrases are rearranged using this order then the first word of each phrase reveals the words ‘FIND CROSSES TO MAKE ONE’. One of the anagrams spells ‘start or end’ as a hint . ‘Find crosses’ signals a need to find churches on the map and link them to make a cross so ‘X marks the spot’.

This anagram aspect was difficult and in some cases the anagrams could give more than one option for a phrase. This was not essential to solving the hunt, but I became aware of it and so decided to downplay its significance when I released an additional clue in May 2021. So, I signalled churches very clearly in the additional clue, and luckily Daniel realised what the building was, and noticed that each of his four grid squares contained a church.

Thanks to everyone who played this treasure hunt, and special thanks to everyone who emailed in their solutions. My least favourite part of this project was telling people their answers were wrong! There was such lot of creativity among the ideas that were presented to me, and the fact this hunt took two years to solve shows this was a tricky challenge. I’d urge everyone who enjoys this kind of puzzle to consider making one themselves. This was, obviously, my first time, and I learned a lot and had so much fun!

I started this all in a strict lockdown with two new kittens, and now it ends with the UK’s pandemic rules lifted and two full grown cats keeping me company. Well done to Daniel, who worked hard to solve this and is a smart and worthy winner. I hope no one will be too sad this is all over, and it’s worth noting there are still plenty more treasure hunts to solve. I wish everyone lots of luck with their future hunting! 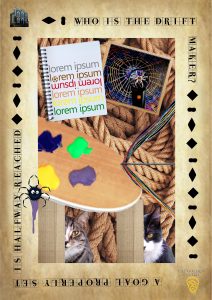